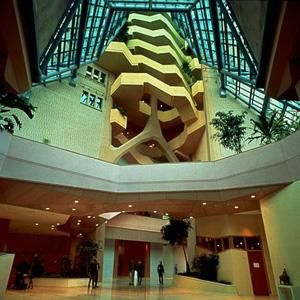 The Gasunie Building is one of the most famous buildings in Groningen. It was built as a headquarters for Gasunie and was officially opened on 22 April 1994 by Her Majesty, Queen Beatrix of the Netherlands. The building has 18 floors and is 89 metres high, which makes it the second tallest building in Groningen after the Martinitoren. It is in the south of the city, on the edge of the Stadspark and right next to the main highways.

The old Gasunie building facilities could not meet the needs of growing number of the employees. After evaluation of economic and practical issues, it was decided to build a new building was made. The project started in 1989 with selecting a suitable site and creating a list of requirements, which architects should have implemented in their proposals.