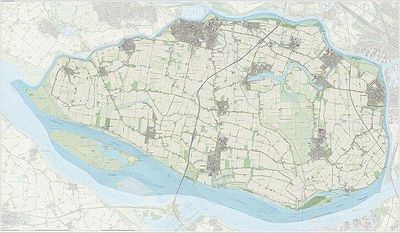 The Hoekse Waard is an island between the Oude Maas, Dordtsche Kil, Hollands Diep, Haringvliet and Spui rivers in the province of South Holland in the Netherlands. The island, part of the namesake municipality of Hoeksche Waard, is a mostly agricultural region, south of the outskirts of Rotterdam. The Hoeksche Waard consists of reclaimed land : after the Saint Elisabeth flood of 1421 most of the area was flooded. The land has been reclaimed gradually in the following centuries.
The Hoeksche Waard formerly consisted of the following municipalities until these were merged on January 1, 2019: