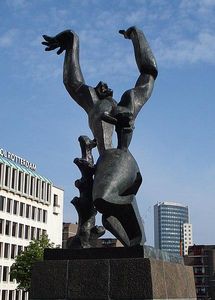 The Destroyed City is a bronze memorial sculpture in the Dutch city of Rotterdam. It commemorates the German bombing of Rotterdam on 14 May 1940, which destroyed the medieval centre of the city. Unveiled in 1953, it was designated as a Dutch national monument in 2010. It is the largest sculpture by the Russian-born French sculptor Ossip Zadkine, his best known work, and the best known sculpture in Rotterdam.

The 6.5 m high sculpture depicts an stylized human figure leaning against a tree stump. The figure holds both hands aloft, with its head thrown back as if crying in grief, and a gaping hole in its chest and abdomen. The absence of a heart is said to symbolise the destruction of the centre of Rotterdam. Zadkine described it as "A cry of horror against the inhuman brutality of this act of tyranny". The sculpture has been compared to the figure with arms raised in terror on the far right of Picasso's painting Guernica. It stands on a tapering 2 m high plinth of Labrador granite blocks . It is sited on the north side of the early 17th century dock basin of Leuvehaven in the centre of Rotterdam.