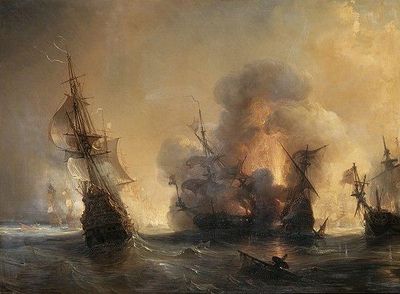 The Battle of Lagos was a sea battle during the Nine Years' War on 27 June 1693 , when a French fleet under Anne Hilarion de Tourville defeated an Anglo-Dutch fleet under George Rooke. Rooke's squadron was protecting the Smyrna convoy, and it is by this name that the action is sometimes known.

In the spring of 1693, a large convoy was organized to transport English and Dutch merchant ships which were bound for Spain and the Mediterranean; they had been held back by the threat of attack by the French fleet, or by commerce raiders.