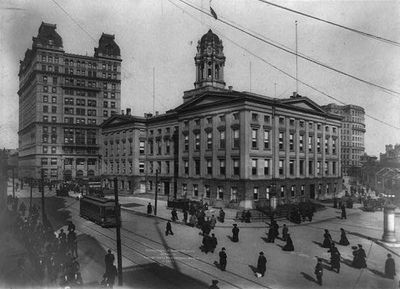 Brooklyn Borough Hall is a building in Brooklyn, New York. It was designed by architects Calvin Pollard and Gamaliel King in the Greek Revival style, and constructed of Tuckahoe marble under the supervision of superintendent Stephen Haynes. It was completed in 1848 to be used as the City Hall of the former City of Brooklyn. In January 1898 the independent City of Brooklyn merged with the City of New York, and Kings County became the Borough of Brooklyn, at which time the building became Brooklyn Borough Hall.

In 1834, the year Brooklyn was granted its city charter, the land for Brooklyn's city hall was donated by the Remsen and Pierrepont families, whose names are commemorated in the names of Brooklyn's Remsen and Pierrepont Streets. The following year, New York architect Calvin Pollard won the commission to design the building in a contest held by the city. The foundations were dug and the cornerstone laid for this structure in 1836. Unfortunately, financial hardship halted construction entirely.