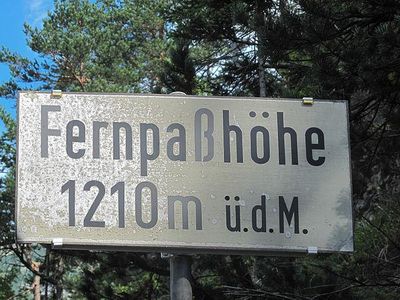 Fern Pass is a mountain pass in the Tyrolean Alps in Austria. It is located between the Lechtal Alps on the west and the Mieming Mountains on the east. The highest peak in Germany, the Zugspitze is only 13.5 km away to the northeast. The pass lies between the Grubigstein on the northwest, the Wannig on the southeast, and the Loreakopf on the west.

The pass was created when a huge mountain slide filled part of the valley to a height of 300–400 meters, distributing its boulders up to 16 km away. While it was initially believed that this had happened at least 12,000 years B.P. as a consequence of the strong temperature increase and intense run-off after the end of the last deglaciation, pollen analysis performed as early as 1940 had already indicated an age of not much more than 4,000 years , an estimate that was essentially confirmed by radiocarbon dating in the 1960s. Using uranium-thorium dating, scientists from Innsbruck University who published their data in 2007 dated the event to 4,150 +/- 100 years B.P., i.e., to the 22nd century BC which corresponds to the latest stages of the Alpine neolithic period.