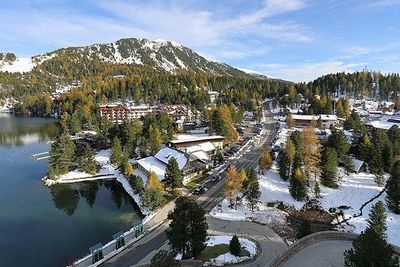 Turracher Höhe, also called Turracherhöhe, refers to a village, a pass across the Alps, and a countryside in the Gurktal Alps in Austria. The village and the Turracher Lake at the pass, which both share the same name, are separated by the border of the two federal states of Styria and Carinthia. Because of its distance to early settlement areas and its high location, the region was not settled until relatively late. In the 17th century, mining was started below the Turracherhöhe. The opening up of the top of the pass by a paved road did not occur until later. During the 20th century, the region was gradually developed for tourism. Efforts are being made to maintain thediversity of flora and fauna of the Turracherhöhe by means of landscape conservation areas and careful and nature-oriented extension of the tourist facilities.