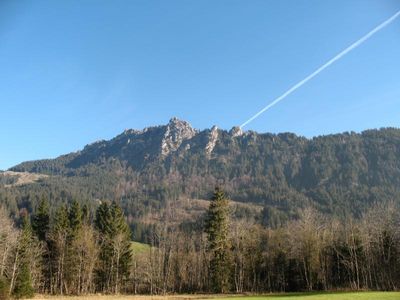 The summit of the mountain Sorgschrofen (1636 m) is very peculiar from a geographic point of view. The area north of it, called Jungholz, forms an exclave of Austria that is connected to the rest of Austria by a single point, which is the summit of the mountain Sorgschrofen (1636 m). As well as housing border post number 110 on the normal international border between Tyrol and Bavaria, a second border starts and, having gone round Jungholz, ends there. There are thus borders extending in four directions from the summit, called a quadripoint. Two Austrian (Tyrolian, Reutte) and two German (Bavarian, Oberallgäu) municipalities meet at that point.