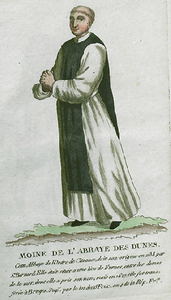 Ten Duinen Abbey or the Abbey of the Dunes was a Cistercian monastery at Koksijde in what is now Belgium. It was one of the richest and most influential religious institutions in the medieval County of Flanders. It later relocated to the city of Bruges.
A religious community was founded in the dunes near Koksijde by the hermit Ligerius in 1107. In 1120 the community took the Rule of St Benedict as its rule of life, and in 1139 it became affiliated to the Cistercian Order. Partly through donations and partly through land reclamation work in the dunes and polders, the monastery developed extensive landholdings on which the lay brothers reared sheep, producing wool for the cloth trade. A dependent house was established at Eastchurch, in Kent, to export wool from England, but was later sold to Boxley Abbey. The daughter house Ter Doest Abbey was founded in 1175 and also became rich and influential.