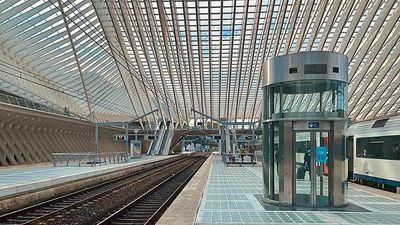 Liège-Guillemins railway station , officially Liège-Guillemins, is the main station in Liège, Belgium. It is one of the most important hubs in the country and is one of the four Belgian stations on the high-speed rail network. The station is used by 15,000 people every day, which makes it the eleventh-busiest station in Belgium and the third in Wallonia. It is operated by the National Railway Company of Belgium .