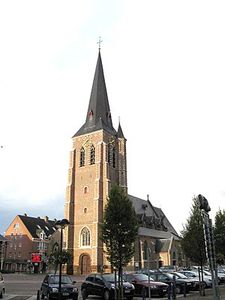 Tessenderlo is a municipality located in the Belgian province of Limburg. It is where the three Belgian provinces of Limburg, Flemish Brabant and Antwerp meet at the front gate of the Averbode Abbey. The municipality Tessenderlo encompasses the villages of Tessenderlo proper, Schoot, Engsbergen, Hulst and Berg. On January 1, 2006, Tessenderlo had a total population of 16,811. The total area is 51.35 km² which gives a population density of 327 inhabitants per km².
It is along the Albert Canal and the European route E313, the highway between Antwerp and Liège, one of the reasons it was the place for the first Belgian "Industrial Zone of National Importance" in the 1960s.