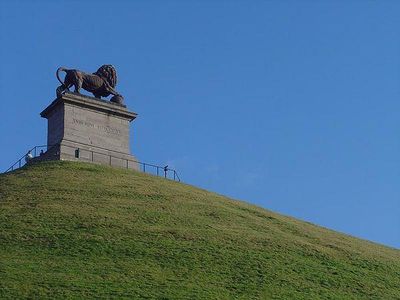 The Lion's Mound is a large conical artificial hill located in the municipality of Braine-l'Alleud , Belgium. King William I of the Netherlands ordered its construction in 1820, and it was completed in 1826. It commemorates the location on the battlefield of Waterloo where a musket ball hit the shoulder of William II of the Netherlands and knocked him from his horse during the battle. It is also a memorial of the Battle of Quatre Bras, which had been fought two days earlier, on 16 June 1815.

The hill offers a vista of the battlefield, and is the anchor point of the associated museums and taverns in the surrounding Lion's Hamlet . Visitors who pay a fee may climb up the Mound's 225 steps, which lead to the statue and its surrounding overlook ; the same fee also grants admission to see the painting Waterloo Panorama.