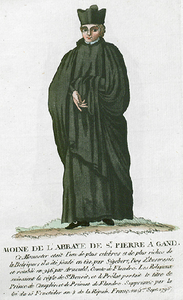 Saint Peter's Abbey is a former Benedictine abbey in Ghent, Belgium, now a museum and exhibition centre.
Saint Peter's was founded in the late 7th century by Amandus, a missionary sent by the Frankish kings to Christianize the pagan inhabitants of the region, who founded two monasteries in the area, St. Bavo's, and Saint Peter's on the Blandijnberg. During the winter of 879-80, the abbey was raided and plundered by the Normans, and it remained relatively poor until the 10th century, when donations of property and relics by Count Arnulf I considerably enriched it, as did further donations by Arnulf's cousin King Edgar of England. By the second half of the century it was the wealthiest abbey in Flanders, and the reputation of the abbey school extended far beyond the town. In 984, Gerbert of Aurillac, director of the cathedral school of Reims, inquired whether students from Reims could be admitted to Saint Peter's, and its renown as a centre of artes liberales continued into the 11th century. Saint Peter's, through its ownership of large tracts of land, also played a pioneering role in cultivation during the twelfth and thirteenth centuries, transforming forests, moors and marshes into farmland. In the fifteenth century a large scale programme of construction created the abbey library and scriptorium, enlarged the refectory, and the abbey church and other buildings were considerably beautified.