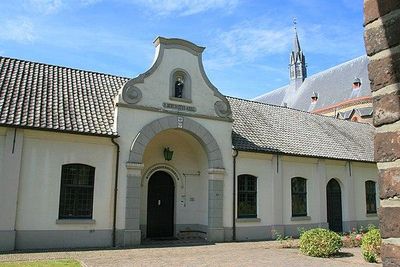 The Trappist Abbey of Achel or Saint Benedictus-Abbey or also Achelse Kluis , which belongs to the Cistercians of Strict Observance, is located in Achel in the Campine region of the province of Limburg . The abbey is famous for its spiritual life and its brewery, which is one of few Trappist beer breweries in the world. Life in the abbey is characterised by prayer, reading and manual work, the three basic elements of Trappist life.

On 30 January 1648, at the end of the Eighty Years War, the Treaty of Münster was signed between Spain and the Netherlands. The result of the treaty was that the Catholic mass was not allowed in the Dutch Republic. Therefore, Catholics from Valkenswaard and Schaft built a chapel in Achel which was part of the Prince-Bishopric of Liège. The early roots of the Abbey date back to 1686, when Petrus van Eynatten, a son of the mayor of Eindhoven, founded a community of hermits of Saint Joseph. The community would flourish until 1789 when they were expelled from their convent after the French revolutionary army invaded the Austrian Netherlands. The abbey was sold to Jan Diederik van Tuyll van Serooskerken .