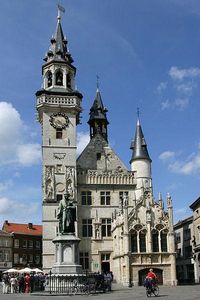 Aalst is a city and municipality on the Dender River, 31 kilometres northwest from Brussels. It is located in the Flemish province of East Flanders in the Denderstreek. The municipality comprises the city of Aalst itself and the villages of Baardegem, Erembodegem, Gijzegem, Herdersem, Hofstade, Meldert, Moorsel and Nieuwerkerken. Aalst is crossed by the Molenbeek-Ter Erpenbeek in Aalst and Hofstade. The current mayor of Aalst is Christoph D'Haese, from the New-Flemish Alliance party. The town has a long-standing feud with Dendermonde , which dates back from the Middle Ages.
The first historical records on Aalst date from the 9th century, when it was described as the villa Alost, a dependency of the Abbey of Lobbes. During the Middle Ages, a town and port grew at this strategic point, where the road from Bruges to Cologne crossed the Dender. While it was within the Holy Roman Empire it was considered the capital of the province of Flanders. In 1046, Aalst was transferred to the Countship of Imperial Flanders, and absorbed a portion of Brabant, and in 1173 it was united with the remainder of the Flanders province. Its frontier position on the border of the Holy Roman Empire allowed the town to keep a certain degree of independence. Its relation with Brabant has been preserved in the city’s white and red coat of arms, the colours of Lotharingia.