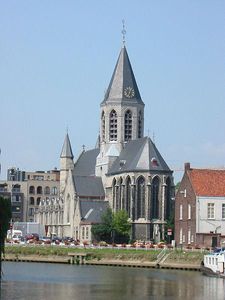 Deinze is a city and a municipality in the Belgian province of East Flanders. It comprises the city of Deinze, and the towns of Astene, Bachte-Maria-Leerne, Gottem, Grammene, Meigem, Petegem-aan-de-Leie, Sint-Martens-Leerne, Vinkt, Wontergem and Zeveren. On January 1, 2019, Deinze had a population of 43,500. The municipality's total area is 75.54 km2 , giving a population density of 375 inhabitants per km².

In 1695, during the Nine Years' War, an English force garrisoned in the town under the command of the Irish general Francis Fergus O’Farrell was forced to surrender to French forces.