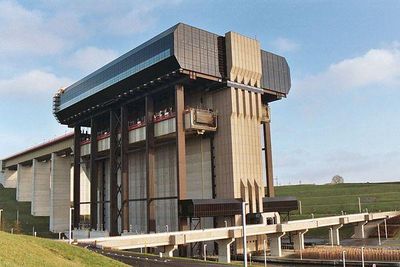 The Strépy-Thieu boat lift lies on a branch of the Canal du Centre in the municipality of Le Rœulx, Hainaut, Belgium. With a height difference of 73.15 metres between the upstream and downstream reaches, it was the tallest boat lift in the world upon its completion, and remained so until the Three Gorges Dam ship lift in China was completed in January 2016.

The boat lift was designed during the Canal du Centre's modernisation program in order to replace a system of two locks and four 16-metre lifts dating from 1888 to 1919. The canal itself began operations in 1879 and its locks and lifts were able to accommodate vessels of up to 300 tonnes. By the 1960s, this was no longer adequate for the new European standard of 1350 tonnes for barge traffic, and a replacement was sought.