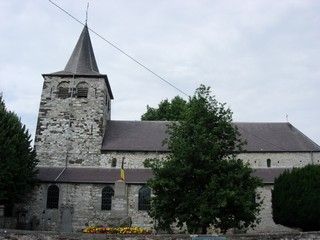 The church of Saint Firmin (Bonneville)

Saint Firmin is called upon by sufferers of rheumatism and pins and needles. Surrounded by its old graveyard, the church partly (the tower and the part before the nave) dates from the 11th century. It was extended eastwards in 1866 by two bays in the same style and a three-plane chancel from the 18th century, probably taken down and rebuilt. It forms a harmonious arrangement in the Romanesque style. At the outset, the squat tower played a defensive role. This can still be guessed by observing the openings provided in its thick walls from where arrows or other projectiles could be fired at any attackers.

You can also discover:

Other free brochures on the history and heritage, museums and discoveries, and nature walks are available at the Tourism Office of the Town of Andenne.