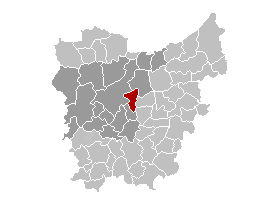 Destelbergen ]) is a municipality located in the Belgian province of East Flanders. The municipality comprises the towns of Destelbergen proper and Heusden and was created on January 1, 1977, by the fusion of these two municipalities. Its western border touches the municipality of Ghent and Melle and is formed by an ancient silted up branch of the river Scheldt.
On January 1, 2011, Destelbergen had a total population of 17,636. The total area is 26.56 km² which gives a population density of 664 inhabitants per km².