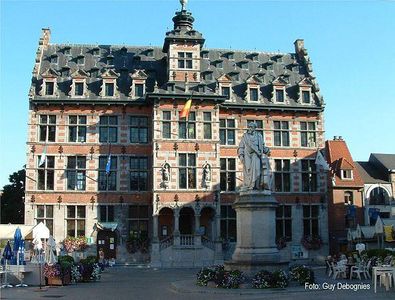 Halle is a city and municipality of Belgium, in the district Halle-Vilvoorde of the province Flemish Brabant. It is located on the Brussels-Charleroi Canal and on the Flemish side of the language border that separates Flanders and Wallonia. Halle lies on the border between the Flemish plains to the North and the undulating Brabant lands to the South . The city also borders on the Pajottenland to the west. The official language of Halle is Dutch.

The municipality Halle comprises the city of Halle proper and the towns of Buizingen and Lembeek. The neighboring towns are: Pepingen, Sint-Pieters-Leeuw, Beersel, Braine-l'Alleud, Braine-le-Château, and Tubize. The population of Halle has increased from 32,758 inhabitants in 1991 to 39,536 on January 1, 2019. The mayor is Marc Snoeck of the sp.a.