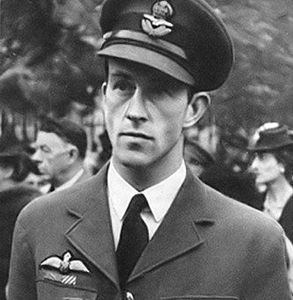 Baron Jean Michel P.M.G. de Selys Longchamps DFC was a Belgian aristocrat and RAF fighter pilot during World War II who is chiefly notable for his 1943 attack on the Gestapo headquarters in Brussels in German-occupied Belgium.
A Belgian cavalry officer with the 1er Régiment des Guides, he escaped with the BEF from Dunkirk returning to France before it finally fell. Trying to join the allies again he was interned by the Vichy authorities but escaped to Britain and was accepted for flight training with the RAF. He was posted to No. 609 Squadron RAF and flew Hawker Typhoons.