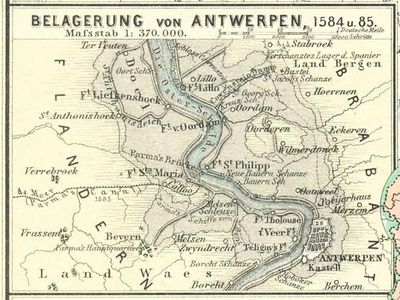 The Fall of Antwerp on 17 August 1585 took place during the Eighty Years' War, after a siege lasting over a year from July 1584 until August 1585. The city of Antwerp was the focal point of the Protestant-dominated Dutch Revolt, but was forced to surrender to the Spanish forces. Under the terms agreed, all Protestants were given four years to settle their affairs and leave the city. Many migrated north, especially to Amsterdam, which became the capital of the Dutch Republic. Apart from losing a high proportion of its mercantile population, Antwerp's trade suffered for two centuries as Dutch forts blockaded the River Scheldt up to 1795.

At the time Antwerp, in modern Belgium, was not only the largest Dutch city, but was also the cultural, economic, and financial centre of the Seventeen Provinces and of north-western Europe. On 4 November 1576, unpaid Spanish soldiery mutinied: they plundered and burnt the city during what was called the Spanish Fury. Thousands of citizens were massacred and hundreds of houses were burnt down. As a result, Antwerp became even more engaged in the rebellion against the rule of Habsburg Spain. The city joined the Union of Utrecht and became the capital of the Dutch Revolt, which no longer was merely a Protestant rebellion but had become a revolt of all Dutch provinces.