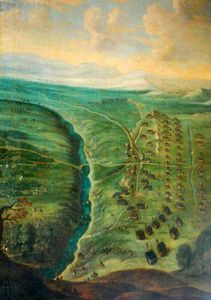 The Battle of Les Avins or Avein took place on 20 May 1635, outside the town of Les Avins, near Huy in modern Belgium, then part of the Bishopric of Liège. It was the first major engagement of the 1635 to 1659 Franco-Spanish War, a subsidiary conflict of the Thirty Years' War.

France supported the Dutch Republic in its war of independence from Spain, but avoided direct involvement. In February 1635, the two countries agreed to divide the Spanish Netherlands and in May, a French army of 27,000 entered the Bishopric of Liège, intending to link up with the Dutch at Maastricht and attack Leuven.