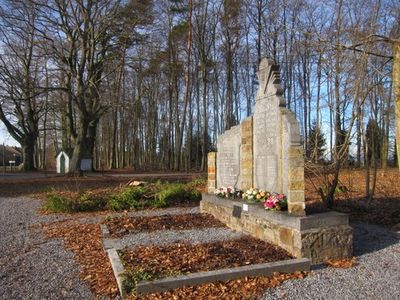 It was in the night of friday 1 to 2 September 1944. A patrol of 5 men is on its way for supplies. The mission: to kill a cow and bring it to the camp. On their way, they encounter the Germans and a shooting is taking place: Maurice Roukens, René Ronvaux and Maurice Lecompte are killed.

Unfortunately, it is not over. After an unfortunate shot fired on the southern edge of the camp, a German column turned back on the main road Ferrières-Werbomont and attacked the camp. A first defense of the armed men of the camp is followed by a second wave. The last men are sent to the firing line to supply them.
The blocked enemy withdraws after 35 minutes of battle using automatic weapons, grenades and light infantry. The suppliers criss-crossed open ground that was under heavy fire from the enemy infantry several times, to carry out their mission.

As prisoners, they were brought back to Ferrières where, before fleeing, their jailers murdered them cowardly in defiance of all the rules of war, along with other young people from various backgrounds. It was September 2,1944; on the eve of Freedom!

On the side of the enemy, seventy attackers are killed, including the commander of the convoy. After the battle the camp was moved to the forest of Fays.