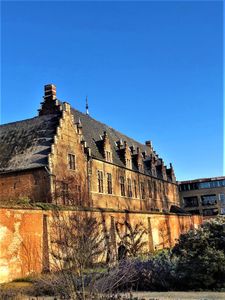 The Tongerlo Hut is a 15th-century building in the Belgian city of Mechelen that once belonged to the Norbertine Abbey of Tongerlo and is currently occupied by the royal tapestry manufacturer De Wit.

The founding in Mechelen dates back to 1482 . In that year Abbot Werner van Halleer bought three buildings to build a new house. In the French era the chapel was probably demolished and the refuge declared a national property with the abolition of the abbey in 1797. During the reign of Napoleon, the building was converted into a gendarmerie barracks . He held this position until 1904.

At the time, the shelter was considered ready for demolition, but the province saved it and had it restored. From 1933 to 1961 the refuge served as an archbishop's museum .