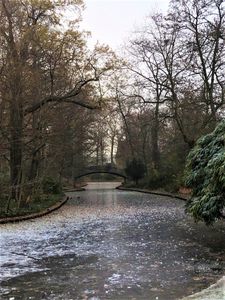 The Botanical Garden (picture report) is the largest public park in the historical center of the city.

The Kruidtuin or "Botanique" has a rich cultural history. The green oasis has served as the garden of the Pitzenburg Commandery since the Middle Ages . After the abolition of chivalry, an English landscaped garden for members of the elite Société Royale d'Horticulture was created in the 19th century. After the First World War it was opened to the public as a city park .

In 2010 the reconstruction of the Dodoenstuin , the authentic herb garden, began. The designer was inspired by a sketch of climbing hops from Dodoens' book Cruyde. Hop cones, winding circles and the distinctive leaf form the basis of the design: the leaves and hop cones become unique communities of plants and herbs, the tendrils connect these structures and the leaves also function as benches.