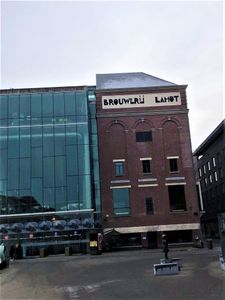 In 1627 the name Brouwerij De Croon already existed in Mechelen.

In 1855 the brothers Charles and Richard Lamot became the owners of Brouwerij De Croon . Both brothers' parents owned their own brewery, one in Willebroek and the other in Boom.

Just before World War I, production was only 30,000 hectoliters , until a new brewery was built in 1922. From then on, several takeovers of small breweries followed, and the Lamot brewery became a fact . I was in the Van Beethovenstraat at the time.

In 1981, Lamot was taken over by the then Piedboeuf brewery, which later joined the InBev group. In 1994 the curtain fell on the Lamot brewery in Mechelen.

Lamot's Place is now a welcoming place in the city center of Mechelen. Not only is it a congress and heritage center, you can also enjoy good food and drink at Grand Café Lamot overlooking the Vismarkt and the Dijle.

In the Brouwgebouw and in the old Lamot offices you will find Food and Drink Culture Puro where you can also discover some memorabilia from the old Lamot site.