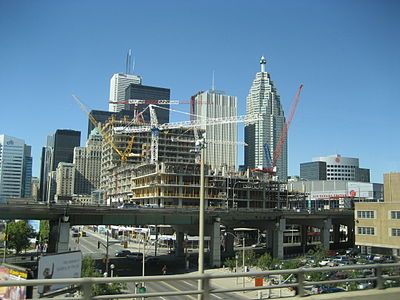 The Frederick G. Gardiner Expressway, commonly known as the Gardiner Expressway or simply the Gardiner, is a municipal expressway in Toronto, Ontario, Canada. Running close to the shore of Lake Ontario, it extends from the foot of the Don Valley Parkway in the east, just past the mouth of the Don River, to the junction of Highway 427 and the Queen Elizabeth Way in the west. East of Dufferin Street, the roadway is elevated, running above Lake Shore Boulevard east of Bathurst Street.
The highway is named after the first chair of the now-defunct Metro Council, Frederick G. Gardiner, who championed it, the Don Valley Parkway and Spadina Expressway projects. The six-lane section east of the Humber River was built in segments from 1955 until 1964 by the Metropolitan Toronto government with provincial highway funds. The ten-lane section west of the Humber was formerly part of the QEW provincial highway. The Gardiner Expressway is now wholly owned and operated by the City of Toronto.