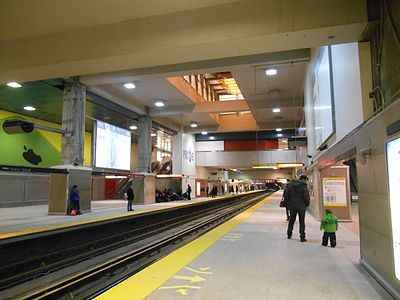 Berri-UQAM station is a Montreal Metro station in the borough of Ville-Marie, in Montreal, Quebec, Canada. It is operated by the Société de transport de Montréal and is the system's central station; the Green and Orange Lines pass through it, and the Yellow Line terminates there. It is located in the Quartier Latin.
Berri-UQAM is the 2nd deepest station in the network, and the only one to have 3 lines stacked on each other. Berri-UQAM is also the busiest station in the network, transfers not included. If transfers were included, the 13 million passengers number would rise to about 35-40 million a year.