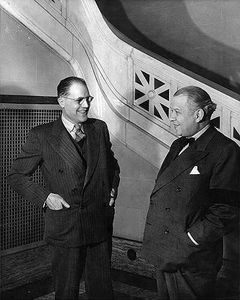 The Conservatoire de musique du Québec à Montréal is a music conservatory located in Montreal, Quebec, Canada. In addition to the Montreal region, the school serves all regions of Quebec, attracting many students from such cities as Granby, Joliette, St-Jean, Saint-Jérôme, Sherbrooke, and Salaberry-de-Valleyfield among others. Founded by the Quebec government in 1943, it became the first North American music institution of higher learning to be entirely state-subsidized. The conservatoire is part of a network of 9 conservatories in Quebec, the Conservatoire de musique et d'art dramatique du Québec , and was the first school in the CMADQ network to be established. Orchestra conductor Wilfrid Pelletier served as the school's first director from 1943 through 1961. The current director is Raffi Armenian.
The CMQM originally held classes at the Saint-Sulpice Library at 1700 Saint Denis Street and in buildings in that vicinity. In 1956 it moved to facilities on Saint Catherine Street and then to larger ones at the Palais du commerce at 1700 Berri Street in 1964. In 1975 the conservatoire moved to the former building of the Palais de justice de Montréal, at 100 Notre-Dame Street which housed 2 electroacoustic studios, 3 rehearsal rooms, 11 practice studios, and 38 teaching studios. The building also contained two performance halls where the school's ensembles, students, and faculty performed public concerts: the Salle Gabriel-Cusson which seats approximately 200 people and the Salle Germaine-Malépart which seats 125.