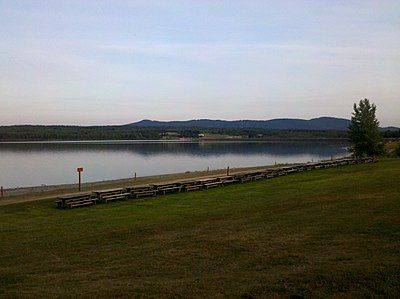 Yamaska National Park is a provincial park centered on the man-made Choiniere Reservoir. It is located in the municipalities of Roxton Pond and Saint-Joachim-de-Shefford in La Haute-Yamaska Regional County Municipality, just northeast of Granby, Quebec. Its undulating hilly landscape is supported by slate and sandstone bedrock. The main soil is a stony sandy loam podzol which has been mapped as the Racine series—one of the most acidic soils in the area.
The soil's acidity and stoniness let few farmers enjoy long-term success. Most of the land either remained in forest or was allowed to be reclaimed by trees. Sugar maple, red maple, balsam fir, eastern hemlock, gray birch, American elm and basswood are among the 40 tree species. There are also 16 amphibian species, 5 reptile species, 35 mammal species and more than 230 bird species.