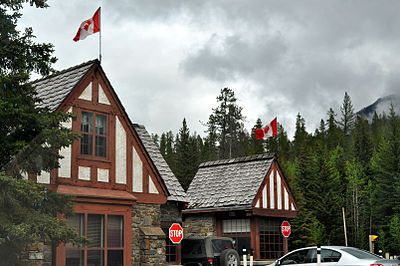 Banff National Park is Canada's oldest national park and was established in 1885. Located in the Rocky Mountains, 110–180 kilometres west of Calgary in the province of Alberta, Banff encompasses 6,641 square kilometres of mountainous terrain, with numerous glaciers and ice fields, dense coniferous forest, and alpine landscapes. The Icefields Parkway extends from Lake Louise, connecting to Jasper National Park in the north. Provincial forests and Yoho National Park are neighbours to the west, while Kootenay National Park is located to the south and Kananaskis Country to the southeast. The main commercial centre of the park is the town of Banff, in the Bow River valley.
The Canadian Pacific Railway was instrumental in Banff's early years, building the Banff Springs Hotel and Chateau Lake Louise, and attracting tourists through extensive advertising. In the early 20th century, roads were built in Banff, at times by war internees from World War I, and through Great Depression-era public works projects. Since the 1960s, park accommodations have been open all year, with annual tourism visits to Banff increasing to over 5 million in the 1990s. Millions more pass through the park on the Trans-Canada Highway. As Banff has over three million visitors annually, the health of its ecosystem has been threatened. In the mid-1990s, Parks Canada responded by initiating a two-year study, which resulted in management recommendations, and new policies that aim to preserve ecological integrity.