RouteYou » Wikipedia » Places of interest » Battle of the Chateauguay 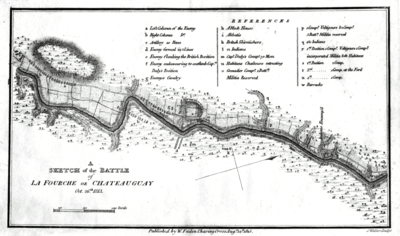 The Battle of the Chateauguay was an engagement of the War of 1812. On 26 October 1813, a British force consisting of 1,630 regulars, volunteers, militia and Native Americans from Lower Canada, commanded by Charles de Salaberry, repelled an American force of about 2,600 regulars which was attempting to invade Lower Canada and ultimately attack Montreal.
The Battle of the Chateauguay was one of the two battles which caused the Americans to abandon the Saint Lawrence Campaign, their major strategic effort in the autumn of 1813.