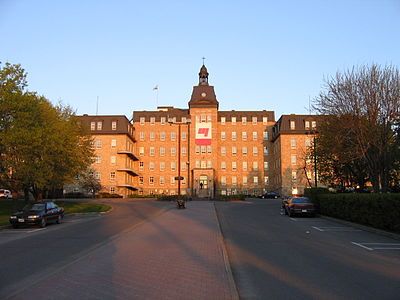 The Université du Québec à Rimouski is a public university located in Rimouski, Quebec, Canada with a campus in Lévis. Founded in 1969 as a satellite campus of the Université du Québec, UQAR provides access to higher education for the people of Bas-Saint-Laurent and the Gaspé Peninsula. It is the furthest north of any university in Québec. UQAR's programs include multidisciplinary research in marine science, regional development, and nordicity. Approximately 6,500 students attend the university. While most UQAR students are from eastern Québec, students also enroll from the countries of the Francophonie. Over 40,000 students have graduated since it opened in 1969.
Founded by Angela Merici in Italy in 1535, the Ursulines were the first Catholic religious order of nuns to arrive in the New World. Taking as their mission the education of girls, the Ursulines established schools and colleges throughout North America. The first Ursuline monastery opened in Rimouski in 1906, on a hill overlooking the Gulf of Saint Lawrence. The building housing the monastery burned down in 1937 but was rebuilt the following year.