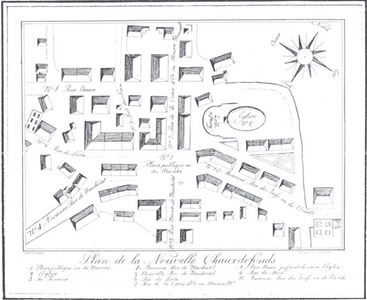 La Chaux-de-Fonds is a Swiss city of the district of La Chaux-de-Fonds in the canton of Neuchâtel. It is located in the Jura mountains at an altitude of 1000 m, a few kilometres south of the French border. After Geneva, Lausanne and Fribourg, it is the fourth largest city located in the Romandie, the French-speaking part of the country, with a population of 38,625.
The city was founded in 1656. Its growth and prosperity is mainly bound up with the watch-making industry. It is the most important centre of the watch making industry in the area known as the Watch Valley. Partially destroyed by a fire in 1794, La Chaux-de-Fonds was rebuilt following a grid street plan, which was and is still original among Swiss cities, the only exception being the easternmost section of the city, which was spared of fire. This creates an interesting and obvious transition from the old section to the newer section. The roads in the original section are very narrow and winding, which then opens up to the grid pattern near the town square. The famous architect Le Corbusier, the writer Blaise Cendrars and the car maker Louis Chevrolet were born there. La Chaux-de-Fonds is a renowned centre of Art nouveau.