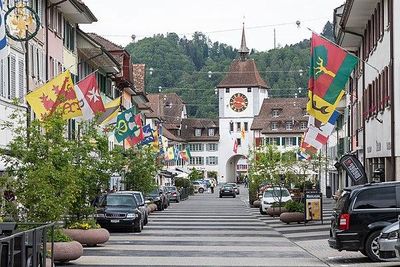 Willisau is a municipality in the district of Willisau in the Lucerne canton of Switzerland. It was formed on 1 January 2006 from the municipalities of Willisau Land and Willisau Stadt . On 1 January 2021 the former municipality of Gettnau merged into Willisau.
There were Roman settlements near Willisau by the 2nd or 3rd century AD. In 893 the Alamannic settlement of Cozeriswilare / Gesserswil was mentioned near modern Willisau. By the 11th century a parish church existed in the area and in 1101 the lords of Honstetten were mentioned as holding the patronage rights over the church at Willineshouwo. In 1245 the Freiherr von Hasenburg held the church and the surrounding lands as a fief for the Habsburgs.