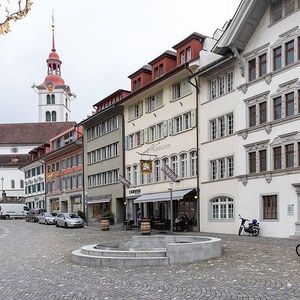 Sursee is a municipality in the district of Sursee in the canton of Lucerne, Switzerland. Sursee is located at the northern end of Lake Sempach, not far from where the Sure river exits the lake , hence the name "Sursee".
The shores of Lake Sempach have been inhabited since the Neolithic. Sursee municipality is home to the Halbinsel prehistoric pile-dwelling settlement that is part of the Prehistoric Pile dwellings around the Alps UNESCO World Heritage Site. Halbinsel was settled a number of times during the Neolithic and Bronze Age. At Zellmoos in the Halbinsel site, the bottom layer is from the Cortaillod culture while there are several Late Bronze Age layers above it. There are three Late Bronze Age layers at Gammainseli. The Zellmoos sites were discovered in 1806 and excavated in 1902, 1941, 1991 and 2005. The Bronze Age sites featured several houses with clay floors. A number of ceramic, bronze, bone, stone and flint items were found in the excavation. The Gammainseli site has been known since the 19th century, and was explored by divers in 2005, who found Late Bronze Age potsherds, animal bones and a few bronze items. Some neolithic flints were also found, but no trace of a settlement has been discovered.