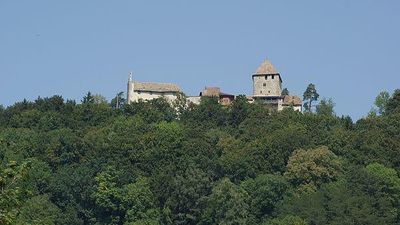 The town's medieval centre retains the ancient street plan. The site of the city wall, and the city gates are preserved, though the former city wall now consists of houses. The medieval part of the town has been pedestrianised and many of the medieval buildings are painted with frescoes.

In or around 1007 Emperor Henry II moved St George's Abbey from its former location on the Hohentwiel in Singen to Stein am Rhein, at that time little more than a small fishing village on the Rhine. This was in order to strengthen his presence at this strategic point where major road and river routes intersected. He gave the abbots extensive rights over Stein and its trade so that they could develop it commercially. In this they were very successful, and Stein am Rhein rapidly became a prosperous town which in the 15th century was briefly granted reichsfrei status.