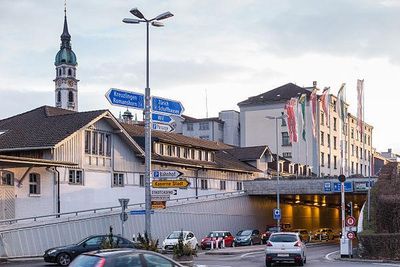 The official language of Frauenfeld is German, but the main spoken language is the local variant of the Alemannic Swiss German dialect.
The earliest trace of human settlement are several La Tène era graves to the east of Langdorf. The Roman road from Oberwinterthur to Pfyn ran through what is now the Allmend in Frauenfeld. Two Roman villas were discovered in Thalbach and Oberkirch. The villa seems to have become the focal point of the later settlement of Oberkirch. On the ruins of the villa, an Early Middle Ages cemetery was built, and by the 9th century, the Oberkirch church was built. Perhaps as a result of royal donation in the 9th century, or more likely a donation in the 13th century, the area around Frauenfeld belonged to the Dinghof of Erching. Erching had a manor house, twelve houses, at least one mill, and probably also a church in Oberkirch. In the 13th century, Erching formed a self-contained manor farm complex and was occupied by a Habsburg Vogt after in 1270. Starting in the late 12th century, a village grew up in the area around Erching and another grew up around the church at Oberkirch.