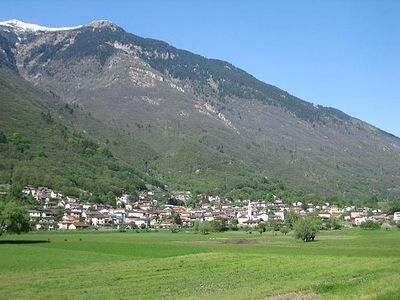 Lumino is first mentioned in 1168 as locus Lugomini. In German it used to be known as Lugmin. The convenient location at the entrance to the Val Mesolcina and the ancient fortifications in the neighborhood indicate that there was an early settlement. The assets of the Bishop of Como in Lumino were given to Capitanei of Locarno in the 12th Century. It is listed as part of the County of Bellinzona in 1335. By 1242 it was already part of a community with Castione, which was dissolved in 1818. Several properties and the tithe belonged to the parish church of Bellinzona. The Church of St. Mamette was first mentioned in 1237 and became a parish church before 1591. The border between Lumino and the Graubünden village of San Vittore was finalized, after centuries of dispute, in 1776. During construction of the new roadway over the San Bernardino Pass in 1818, the cantonal authorities forbade the inhabitants of Lumino from making improvements on the road between the Moesa bridge and the border with Graubünden. In the last decades of the 20th Century, the construction of many new houses and the resettlement of a small but thriving industry changed the village from a small farming village.
Lumino has an area, as of 1997, of 9.95 square kilometers . Of this area, 1 km2 or 10.1% is used for agricultural purposes, while 7.59 km2 or 76.3% is forested. Of the rest of the land, 0.53 km2 or 5.3% is settled , 0.15 km2 or 1.5% is either rivers or lakes and 0.41 km2 or 4.1% is unproductive land.