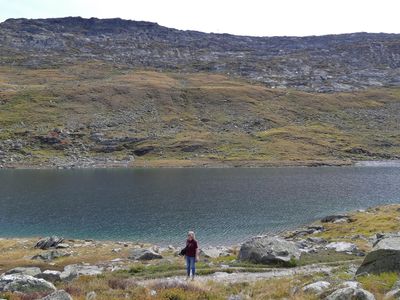 In the 19th century, the Märjelensee was located on the edge of the higher Aletsch Glacier ("Glacier Edge Lake") and the glacial lake was 1½ kilometers long and ½ kilometers wide. The 24 floods of the lake in that century, caused by sudden discharge of water from the crevasses, caused serious damage in the valley at the bottom of the Aletsch Glacier. But there were also repeated floods in the neighboring Fieschertal. In order to prevent further damage from flooding of the ice reservoir, canals were built in 1828 and 1829 towards the Fieschertal. However, they were filled in by the residents, who were not interested in additional water in their valley. In the summer of 1895, a 900-meter relief tunnel was constructed to limit flooding. Due to the retreat of the glacier and therefore a lower water level in the Märjelensee, this tunnel was only used once in 1896. Nowadays there are a few small lakes, together called Märjelensee, next to the Märjelen reservoir.