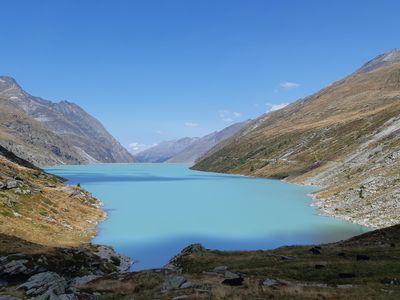 The road through the Saas-tal in Wallis ends at the largest earth dam in Europe: the 115-meter-high Mattmark-dam at 2,200 meters. The path around the scenic Mattmark reservoir follows the shores of the lake and has little difference in elevation. The slopes in the west lead to two mighty glaciers, which are clearly visible from the other side of the reservoir: the Allalin and the Schwarzberg glacier. At the southern tip of the lake, a historic path - former trade and smuggling route - leads to the Monte Moro pass on the border with Italy. During this hike you have a good chance of spotting wildlife.

The construction of the dam took a heavy human toll. On August 30, 1965, part of the Allalin Glacier was released high above the construction site. About 2 million cubic meters of rock and ice collapsed and buried staff accommodations. In total 88 workers were killed. The reservoir can hold 100 million cubic meters of water and has an area of ​​approximately 1¾ km². Hydroelectric plants further down the valley can generate almost enough electricity for all households in Valais.