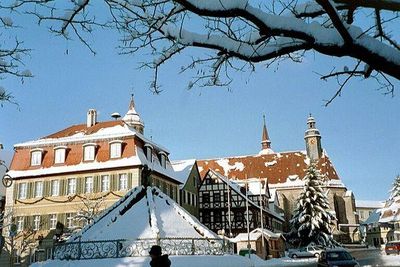 Feuchtwangen is a city in Ansbach district in the administrative region of Middle Franconia in Bavaria, Germany. In the year 2019 Feuchtwangen celebrated its 1200th jubilee based on the first mention of its Benedictine monastery.
Geographically and geologically the land around Feuchtwangen comprises the eastern part of the Swabian-Franconian Escarpment Land , also sometimes called the gypsum-keuper landscape. Characteristic of this landform is the quick change from deep hollows to mostly wooded mountain ranges, which were formed as the result of keuper strata not being well able to withstand erosion. This also meant that streams in the region could carve broad valleys. The city of Feuchtwangen lies in the Sulzach valley. The city's sprawling area also takes in parts of the Wörnitz valley.