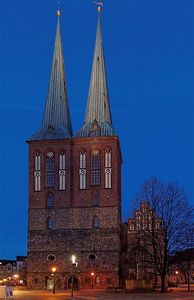 Source: Pedelecs by Wikivoyage and Wikipedia

The St. Nikolai-Kirche, is the oldest church in Berlin, the capital of Germany. The church is located in the eastern part of central Berlin, the borough of Mitte. The area around the church, bounded by Spandauer Straße, Rathausstraße, the River Spree and Mühlendamm, is known as the Nikolaiviertel 'Nicholas quarter', and is an area of restored mediaeval buildings . The church was built between 1220 and 1230, and is thus, along with the Church of Our Lady at Alexanderplatz not far away, the oldest church in Berlin.

Originally a Roman Catholic church, the Church of St. Nicholas became a Lutheran church after the Protestant Reformation in the Electorate of Brandenburg in 1539. In the 17th century, the prominent hymn-writer Paul Gerhardt was the minister of this church, and the composer Johann Crueger was musical director. The prominent Lutheran theologian Provost Philipp Jacob Spener was the minister from 1691 to 1705. From 1913 to 1923 the minister at the Church of St. Nicholas was Wilhelm Wessel, whose son Horst Wessel later became famous as a Nazi: the family lived in the nearby Jüdenstraße.