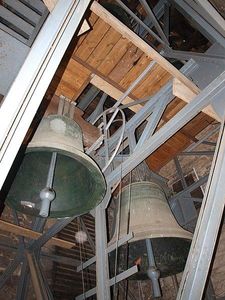 The Catholic Cathedral of Limburg , also known as Georgsdom in German after its dedication to Saint George, is located above the old town of Limburg in Hesse, Germany. It is the cathedral of the Catholic Diocese of Limburg.
Its high location on a rock above the river Lahn provides its visibility from far away. It is the result of an Early Gothic modernization of an originally Early Romanesque building and therefore shows a Romanesque-Gothic transitional style.

When the first church was built above the Lahn on the "Limburger Felsen" is not exactly known. According to a reference in the Nekrolog of the Basilica of St. Castor in Koblenz, Archbishop Hetti of Trier consecrated a church of St George in "Lympurgensis."