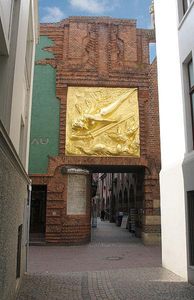 Böttcherstraße is a street in the historic centre of Bremen, Germany. Only about 100 m long, it is famous for its unusual architecture and ranks among the city's main cultural landmarks and visitor attractions. Most of its buildings were erected between 1922 and 1931, primarily as a result of the initiative of Ludwig Roselius, a Bremen-based coffee-trader, who charged Bernhard Hoetger with the artistic supervision over the project. The street and its buildings are a rare example of an architectural ensemble belonging to a variant of the expressionist style. Several of the houses can be classed as Brick Expressionism. Since 1973, the ensemble has been protected by the monument protection act.
Roselius, a sympathiser of National Socialism, pursued Völkisch-Nordic cultural ideas influenced by the ideologists Julius Langbehn and Herman Wirth, involving a belief in the irreplaceable value of the Nordic race. He aimed to have these ideas materialise in Böttcherstraße. Roselius stated "The re-erection of Böttcherstraße is an attempt to think in a German way" – "I want, and that is the deepest aim of what was created in Böttcherstraße, to break the spell of the banishment the ill-informed Romans sentenced our people to, which still weighs upon us..." Although Roselius and Hoetger paid tribute to Hitler as the "Bringer of Light" on a relief at the entrance, the Führer rejected this variant of völkisch art in a Reichsparteitag speech on 10 September 1936, in which he dismissively referred to Böttcherstraßenkunst . The NSDAP dressed Böttcherstraße down as reflecting a "divergent view of culture", and while the street was listed as an architectural monument on 7 May 1937, it was listed as an "example of the degenerate art of the Weimar period". Roselius tried to become a member of the NSDAP twice but his application was rejected twice due to his 'degenerate art' and independence that the Nazis found disconcerting. In October 1936 Ludwig Roselius injected more capital into Focke-Wulf aircraft company thereby increasing his shareholding to 46% and regular board meetings were held in the Boettcherstrasse.