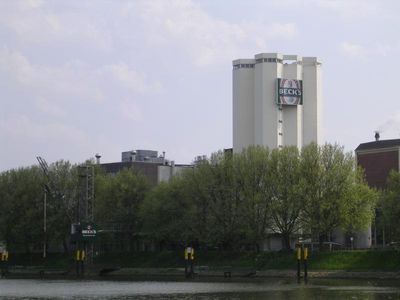 The Beck's Brewery is a symbol of Bremen. Also vice versa because Beck's logo, a key, is the mirror image of the coat of arms of Bremen.
Beck's is the number one German export beer by volume and is sold in over 100 countries. The famous Beck's Brewery was family owned till 2002. It was sold to the Belgian Inbev. You might also know Beck's as Kaiserbrauerei Beck & Co.

Since Beck's is located on the river of a port city, it was easy to ship out its beer to the world at large and become an international beer powerhouse. Beck's is known for its pale lager.