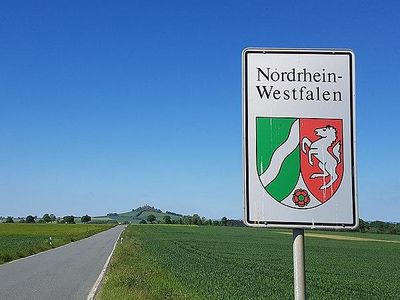 North Rhine-Westphalia ; Low Franconian: Noordrien-Wesfale; Low German: Noordrhien-Westfalen; Kölsch: Noodrhing-Wäßßfaale, commonly shortened to NRW ) in both written and spoken language) is the most populous of the 16 states of Germany.

North Rhine-Westphalia is located in western Germany covering an area of 34,084 square kilometres , which makes it the fourth-largest state. Apart from the city-states it is also the most densely populated German state. NRW has a population of 17.9 million making it the largest German state by population and features 30 of the 81 German municipalities with over 100,000 inhabitants, including Cologne , the state capital Düsseldorf, Dortmund and Essen and other cities predominantly located in the Rhine-Ruhr metropolitan area, the largest urban area in Germany and the third-largest on the European continent. The location of the Rhine-Ruhr at the heart of the European Blue Banana makes it well connected to other major European cities and metropolitan areas like the Randstad, the Flemish Diamond and the Frankfurt Rhine Main Region.