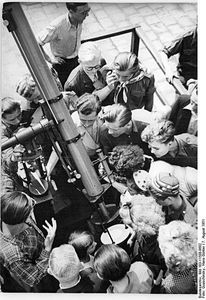 The Archenhold Observatory, named in honor of Friedrich Simon Archenhold, is an observatory in Berlin-Treptow. It houses the Großer Refraktor , which is the longest pointable telescope in the world. It is also called the Himmelskanone .

The Archenold Observatory began as a temporary installation at the 1896 Great Industrial Exposition of Berlin. At the initiative of Wilhelm Foerster and Max Wilhelm Meyer, it was intended to present scientific and astronomical knowledge to the general public. Plans for a large telescope that Friedrich Simon Archenhold had been working on were invoked for this purpose. Although his plans were for a research instrument, its design was already being criticised at the time. Admittance charges at the exposition were intended to finance the construction and later relocation of the instrument. The telescope was erected in the Treptower Park and sheltered in a wooden building that also provided exhibition space and a lecture theatre. When the industrial exposition opened on 1 May 1896, the Great Refractor was still unfinished; it began operation in September 1896. The telescope has an aperture of 68 cm and a focal length of 21 m ; the movable mass is 130 metric tons.