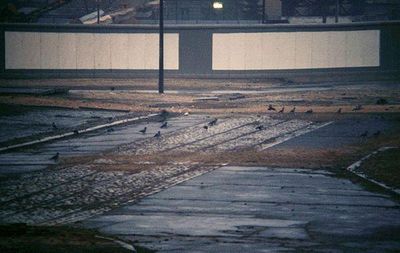 Potsdamer Platz , literally Potsdam Square) is an important public square and traffic intersection in the center of Berlin, Germany, lying about 1 km south of the Brandenburg Gate and the Reichstag , and close to the southeast corner of the Tiergarten park. It is named after the city of Potsdam, some 25 km to the south west, and marks the point where the old road from Potsdam passed through the city wall of Berlin at the Potsdam Gate. After developing within the space of little over a century from an intersection of rural thoroughfares into the most bustling traffic intersection in Europe, it was totally destroyed during World War II and then left desolate during the Cold War era when the Berlin Wall bisected its former location. Since German reunification, Potsdamer Platz has been the site of major redevelopment projects.

Potsdamer Platz began as a trading post where several country roads converged just outside Berlin's old customs wall. The history of Potsdamer Platz can probably be traced back to 29 October 1685, when the Tolerance Edict of Potsdam was signed, whereby Frederick William, Elector of Brandenburg-Prussia from 1640 to 1688, allowed large numbers of religious refugees, including Jews from Austria and Huguenots expelled from France, to settle on his territory. A key motivation behind the Edict was so the Elector could encourage the rapid repopulation, restabilising and economic recovery of his kingdom, following the ravages of the Thirty Years' War . Altogether up to 15,000 Huguenots made new homes in the Brandenburg region, some 6,000 of these in its capital, Berlin . Two other things resulted from this huge influx. Firstly, Berlin's medieval fortifications, recently rebuilt from 1658 to 1674 in the form of a Dutch-style star fort, on an enormous scale and at great expense , became virtually redundant overnight; and secondly, the already crowded city became even more congested.